Hitch hiking and various other pastimes #11 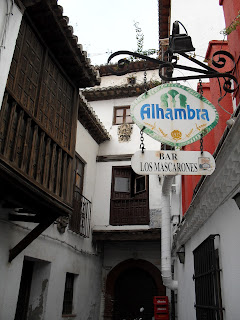 ..By that time it was 7 a.m. and I couldn't keep my eyes open, so I dozed off multiple times on the coach, while an elfish looking woman read about esoteric astrology next to me. As we neared Granada it started to rain, which I found peculiar, but it didn't last long and after 20 minutes I had reached Granada bus station safe and sound. I checked for a bus to Lanjaron, the small village in the Alpujarras, which was my next destination. There were several buses a day and for less than 5 Euros, but I decided to ring my HelpX hosts first.

I did this in an internet cafe, but only after I had wolfed down a 'bocadillo del calle' and some fruit. I sent a message to Sam and talked to Cowie breifly on the estranged internet, then rang Bastian & Inge, my prospective volunteer placement. The muffled voice on the end of the line told me to come on Monday as they had some stuff to sort out over the weekend. This wasn't what I was expecting to hear but decided to make the most of the situation and stay in Granada for the weekend.

I walked the few kilometres from the bus station to the centre of the city, with my back starting to hurt due to my heavy rucksack. I wandered around the tiny cobbled streets of the Albaizin, half searching for some hostels which I had scribbled down at the internet cafe. I didn't have much luck and ended up in Plaza Nueva, a bustling square right in the heart of the city, with the high court and one end and the start of the Moroccan-influenced Albaizin at the other, where the smells of incense, cooked meat, tobacco and rubbish drifted together seamlessly.

There were numerous people in and around the square, foreign tourists, Spanish tourists and locals, but I stumbled upon John, the English artist who was sketching the square on a large sheet of brown paper in order to collect some change from passers by. I sat on my bag and talked for a while with him, mentioning that I was looking for a place to stay for 2 nights, after which he suggested I try his landlord, as he could possibly give me a room for 10 Euro a night. So off I went to meet Rafael, the 78 year old, who'd lived his whole life in the centre of Granada, in his tiny 'casita' above the rooms which he rented out.

He was partially deaf and slightly senile, so communication was slow to say the least and when he described how the shower worked, I was lost completely. But I paid the 20 Euro and got my room, which was very basic but as John had said; a true taste of Andalucian architecture and living. After a week of tents and motorway services I was definitely looking forward to sleeping in an actual bed.

It was still early in the day so I headed back to Plaza Nueva and talked to John for a bit longer, who was an interesting guy, choosing to live in a way most people wouldn't; selling his sketches occasionally and getting change irregularly off tourists in order to pay his rent, which he said was as much as he could afford at any one time and Rafa was ok with that, mostly just wanting someone to look after the place downstairs and turf out and unruly residents. He had lots of stuff going on, working on various projects around Europe, both artistically and personally.

John recommended I take a walk up to the viewing point or Mirador, up through the Albaizin to the top of the hill. It sounded great so I headed up through the tiny streets, still taking in all the sights and smells and being so relieved to not have my backpack I was practically sprinting through the alleys. 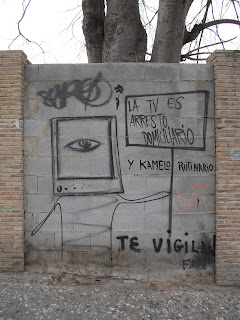 Spain is covered in graffiti, from head to toe and Granada was no exception, with anti-everything graffiti on every corner, very much a refreshment from the British name tagging scallywag scrawls. I reached the viewing point and pondered over the lovely landscape for a few minutes, and as breathtaking as it was, I wanted to explore the caves which lay further down to the left...
Posted by Jack Spacey at 05:10 0 comments