Hitch hiking and various other pastimes #14

..I rose before first light the next day, mostly due to the clocks going forward and walked through the empty streets, after padlocking my room and posting the keys back through the door. I passed the Plaza de la Revolucion, the Universidad and my aforementioned internet cafe and arrived at the marble, where I phoned Bastian as to my arrival time and at some 'churros', then hopped onto the bus headed for Lanjaron.

There were barely any people on the bus; a couple of young guys, one or two women and an extremely large chap who chatted non-stop to the driver, a balding grumpy Spaniard who cursed me as I got off the bus after the last stop in Lanjaron, an easy mistake to make for a tired Englishman.

I waited by the small petrol station, one of the last buildings in the village, surprised at how much it was here than in Granada, with my breath being clearly visible against the spectacular backdrop of the Alpujarras...the foothills of the vast Sierra Nevada.

After a bit of confusion and a pleasant 45 minute wait, a white Land rover pulled up with a slightly greying lady inside, who I presumed to be Inge, my prospective host. I threw my backpack onto the back seat and hauled myself up into the dusty cabin. I introduced myself, exchanged some pleasantries, then waited in the 4x4 while Inge got some items from the local shops.

Then came that ascent up the mountain track, a route I had done countless times in the back of the old Nissan Sunny, or hanging out the window; a ten year old face being woken up by the cold mountain mist on the way to a small rural Spanish school where everything was new and strange.

How peculiar to be driving past old neighbours, the same purple Seat Marbella parked on Juaqui's goat farm, the same dust settling on the dashboard and those wonderful smells of the wild mountain plants mixed together in a subtle nasal cocktail. We shook and shuddered up to around 1350m where the same black gate leading down to La Chaparra stood.

It looked similar yet very different, my memories mixing with the altered gardens and house. To my great surprise, it was Bonita, the old dog, that greeted me, the same she had probably done so 12 years ago, albeit with more flesh on her then. I was quickly introduced to Bastian and Bruno who were busy building the bunker/root cellar and then shown to a small caravan, which would become my quarters for the duration of my stay, however long that should be.

Hitch hiking and various other pastimes #13 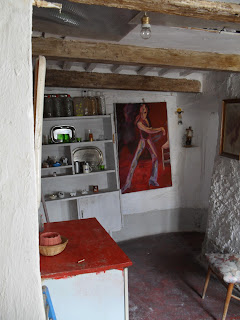 ...On my way back to the centre, I passed the graveyard which John had recommended I take a look at, but it was shut for lunch and then the Alhambra with plenty of tourists flocking around the entrance. My slightly vague memories came back to me after I strolled down the tree lined path, flanked by tiny streams on either side which leads from Plaza Nueva straight up to the Alhambra Palace.

Upon arrival in the Plaza, I spotted John and asked him how he was, he said that it was particularly bad for a Sunday and he had only collected a few 'centimos', later he announced it as his worst Sunday ever in Granada. While I was sitting with this English street artist, Rafa, his old landlord came by, shuffling in his tartan slippers, and asked if I wanted to come to his casita for a beer, to which I obliged and said I'd be there 'a las ocho'.

Before I went to Rafa's though I wandered around Granada a bit more, encountering lots of street musicians and other performers up and down the busy 'calles'; a didgeridoo player, a swing band that used props and looked like there were possibly cave-dwellers or van-livers and acoustic guitars strumming to the people paseo-ing in the plaza.

I returned to my room, then headed up through the tiny graffiti'd alleyways to Rafael's. I knocked and entered, and there he was, his house consisting of four tiny rooms, including the central living room. He showed me around his decorated little house and then set forth cooking me a 'tortilla francesa' and proceeded to put yoghurt's, fruit, biscuits and beer in front of me, which I could hardly turn down.

I ate and we had some small conversation, with him repeating questions and me repeating pigeon Spanish answers. I thanked him for his hospitality and then escaped into the night, promising to visit him if I'm ever back in Granada.

That evening John was on an ultra cheap diet, consisting of garlic, tomato and olive oil on white bread. To show him some gratitude for hooking me up with a room, I bought us some cerveza's and we sipped a few before exchanging emails and heading to our separate night time abodes.
Posted by Jack Spacey at 05:33 0 comments

Hitch hiking and various other pastimes #12

After passing multiple hippy vans at the top of the hill, behind the white church, I was in cave territory, 'Las Cuevas'. It was a strange area with lots of litter strewn all over the place, but also nicely kept (illegal) caves. I walked around on the little pathways, hither and thither and was starting to head back down to the centre, when I passed some abandoned cave-dwellings and suddenly heard loud barking out of nowhere behind me, then a large appeared, snarling and barking aggressively, before I knew it, it had gone for me. I instinctively turned my back on it and stumbled into the cacti behind me. Then it was gone and I ascended the mountain in a state of shock, stopping at a painted van to rinse the small wound with some water. I hobbled back down the Albaizin area to tell John what had happened.

He informed me, to my relief, that there was no Rabies in the area, however I went back to my little room and rinsed it out further to be on the safe side. John had made a few euros that day so we headed to his 'local', a small bar 15 minutes walk away in downtown Granada. As he had mentioned, it was nothing special, but they knew him and the tapas were extremely good, which I can vouch for, as, between us we had a decent sized bowl of chips, meat and sauce to accompany out beverages of choice. The second tapas was skewered marinated meat with some bread. Especially good for John with his small budget and love for drinking, it was a 2 for 1 offer too good to turn down.

We watched the end of a Real Madrid thrashing and headed back to the casa, where we consumed a few more beers and talked late into the night, during which he mentioned his sustainable community project in Northern Spain, which sounds promising and he obviously knows alot about such matters, having connections in various such establishments.

After not being able to resist the combination of alcohol and cigarettes, I woke up with a sore head and throat, so I pepped myself up a bit by getting my first shower for nearly a week. Although the shower was a complicated old Spanish device, I figured it out and washed in the tiny little shower cubicle, with walls that were caving in on me, but, it was lovely feeling to be in warm clean water again. 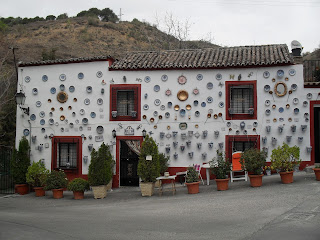 The previous day, John had explained a walk that he sometimes took people on, 5-6 hours including a picnic, so I set off using my hazy memory of his rough directions as a guide. Past the ancient little pueblo of Sacramonte, where the original Gitanos or Gypsy's lived, past ferocious dogs behind ragged wire fences, mountain bikers and plenty of prickly pear cacti; until I arrived at the crossing over the small river and started to climb on the small dirt tracks from past paseo's and mountain bikers alike. It was lovely to walk alone again in the mountains, even though I was only 25 minutes from the city centre, the smells and noises all came flooding back and I found myself almost instinctively making noises to warn off wild boars.

After passing an inhabited cave almost 45 minutes up the mountain, I began to search for a suitable picnic location, but I decided I wanted a view to accompany to my sandwich and glow in the dark fruit juice, so i carried on clambering up through the scrub, past giant ants and noisy bee's until I reached a plateau of extremely red soil, where there were lots of mountain bike trails and more signs of life than before. I followed the main path round and was confronted by a picnic area with hundreds of Granadino's milling around in the shade of the pine trees. the noise was overwhelming after the tranquillity of my ascent and I sought solitude further down the hill, where I ate and drank, looking out over part of the city, towards my next destination; the spa-town of Lanjaron, the pueblo I went to school in, what an experience to be back there...would anyone recognise me? Probably not, although I half expected to see some familiar faces, or if not, at least places from a past life.
Posted by Jack Spacey at 06:42 0 comments