Hitch hiking and various other pastimes #15 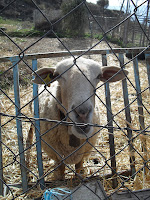 (Sorry for the lack of posts recently, I will get back on track with them)

..Then we ate, a feast of spaghetti and sauce, more than enough for 4 people, which we washed down with some celebratory glasses of wine. I told them bits and bobs about myself over the food and was I would be cracking almonds that afternoon, as a gentle introduction to work on this conspiracy-theory fuelled, remote sustainable dwelling.

After said almonds were cracked, I was shown around the main lower garden, a maze of fenced-off vegetable patches, olive terraces and various animal pens, including the geese and chicken runs, the large rabbit cage, containing 20 or more black and white (edible) fluffballs, and the 2 sheep in their enclosure at the bottom of the garden. All these were joined together with little paths leading here and there, with the platform that David (the man who lived here previously and the one whom we lived with) had done some form of martial arts/meditation on, at the heart of the garden, surrounded by fruit trees and pleasant smelling bushes. 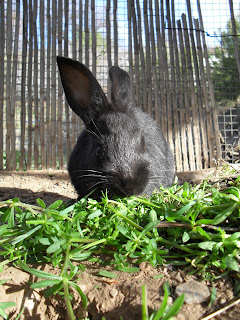 My hosts seemed nice enough, the semi-typical alternative type that this part of Spain seems to attract in abundance, possibly due, in part, to Chris Stewart's 'Driving over Lemons'. Over the next few days, I was to learn that my reading on conspiracy theories and occultism was nothing compared to what they believed and practised for the most part. Personally, I like to keep an air of skeptisism about such matter and, although it is clear to me that the world is becoming something uninhabitable due to various powers in place, I find it hard to believe in fables such as the lost city of Atlantic or the pyramids being constructed by 'aliens', although it certainly makes for interesting and dynamic conversation. On a more down to earth note, before our evening meal of cheeses, hams and bread, I fed the rabbits with a mixture of plants and weeds collected from around the garden, doing 2 jobs in one.

I had been at Semilla Besada almost two weeks and it had gone incredibly fast, it seemed like only a day or two ago since I was in Granada with John. I'd settled in reasonably well and had definitely been putting my hours in; Monday to Friday, working from 9ish til 2 then working 3ish til 7-8. However I had been sleeping well in the caravan that I called home. I lit the stove every night then read till the heat had peaked in my box of delights, then I crawl into my sleeping bag, comfortable and warm, only to wake up shivering every morning. The temperature sure did drop at night and when the clouds descend.

For 3 days it rained quite significantly on and off and we even witnessed some snow; in April this must be a rare occurance, but to wake up and see the immense Sierra de Lujár iced with the snow, the radio antenna its cherry on top, or the frozen grass crystals around Paco's sprinkler made waking up in a fridge slightly more bearable.

The first week here on the mountain had been peculiar affair, settling in, getting into a semi-routine again after the sporadicity of hitch-hiking and being around people permanently as opposed to lots of solitary pondering en route. My spirits were admittedly undulating as the dats wore on, moments of bliss and peacefulness followed lonely cold nights, I believe a partial reason for this could be due to my desire keep on travelling, keep on moving, but I found myself static, having small urges to flee but also wanting to take my time, extend my budget as much as possible and absorb all there is. But I had only been there 11 days, I told myself, its to easy to see how people say 'the road is addictive', it may well be, but it is also severely exhausting, so in that way, a temporary home is welcome...