Hitch hiking and various other pastimes #4

Sean was a small, gingery truck-driver who had also travelled a fair when he was younger and was eager to tell me the in's and out's of trucking. It appeared as if my lack of success in the truck-parks could very well be the dreaded insurance and the fact that the lorries are on the road 8+ hours a day makes the insurance iffy to start with...adding more people to the equation skews it even more.

Feeling on top of the world after finally getting out of the ghastly South Mimms services, I invested in an overpriced tuna sandwich and wolfed it down in the sun at Thurrock services. I walked past and greeted a Scottish guy who was hitching somewhere up north, but his reaction seemed semi-agitated so I left him to it, wandered further down the exit road and stood on the middle divider.

There were hoards of vehicles heading past, both lorries and cars, and once again I was in top spirits. Peculiar thoughts and passing comments are a source of constant amusement whilst trying to win a ride, but I find my prejudices still surfacing, presuming certain people will most certainly not give me a ride and raising my hopes when a 'suitable candidate' drives past. It seemed a lot of truckers were willing to take me, however they were also going the wrong way unfortunately. A young guy in a Mercedes saloon drove past me on the other side of the road and asked me where I was headed, however he was going direction Milton Keynes. Not long after that he drove past again on my side of the road and said the best he could do was to pick me up in an hour and a half, after he'd been to his office. He explained his eagerness to help me out; he himself had hitch hiked throughout Canada a couple of years ago..

A definite link between all the generous souls who have picked me up is their previous travel experience and consequently their love of travel. It would seem the openness of voyaging and the new experiences it brings, makes individuals more aware, responsive and willing to help, perhaps having experienced the generosity and hospitality of other aids this cause. Either way I was very grateful to all those who gave me a seat in what is usually a private space.

After the young guy sped off with my thanks having been said, not 2 minutes later, an older gentleman in a red Mercedes, a real luxury car, pulled over and said he was going to Maidstone via the M20. I obliged, he popped the trunk and I slid down and into a lovely interior of leather and polished wood. The incredibly reclined seat in which I found myself instantly seemed to soothe any pain I might have from carrying my backpack. Phillip, my chauffeur as it were, was delivering said car to Maidstone, he then proceeded to tell me that often when he has delivered a car and needs to get to his next destination, he becomes a hitch hiker himself, albeit a slightly more professional, business-like one. Using the special registration plate which was secured in the window, people recognised him as a professional driver and extend their generosity his way.

It was an absolute please to sit in this beautiful modern piece of German engineering, hearing it tick through the automatic gearbox and listening to Phillip's tales of his days working as a photographer on a cruise ship all over the world and how different hitch-hiking is in Africa (Botswana to be specific). It seems a friend of his managed to pay off a mini-bus purely by picking up passengers on his way to work for 2 years.

Phillip was following his sat-nav and before we knew it, we had arrived at the junction where the M20 towards Dover turned East whereas Phil was headed into Maidstone itself. Had I have known this at the time I would have asked to join him. He hastily dropped me at the side of the dual carriageway and I walked back up towards the M20 on ramp, sign in hand and feeling optimistic. However upon arrival at said junction it was quite clear that it was a terrible thumbing spot, being on a bend with no place to pull over and vehicles travelling over 50mph. After a scramble uphill to get to this spot, I stuck it out for a short while before throwing in the towel and searching for a better spot. 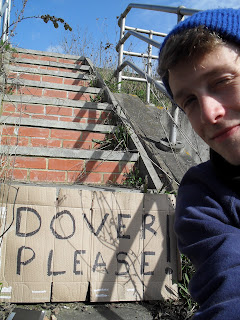