Hitch hiking and various other pastimes #7

..Backtracking to my arrival in Calais, after an uneventful crossing in mostly mist and then arriving in the port to be greeted by beaming sun on the beach. I stepped off the ferry feeling about hitching down towards Bordeaux and after some minor deliberation, found what seemed to be 'the' hitching spot, judging by numerous scrawled messages on the back of the nearest lamppost.

I had what I though were some good signs to get me out of the port area, but even though the traffic was thick, both with truckers, holiday-makers and locals, not a single soul made a small gesture of kindness until a couple of hours later. Even then, the young French man who had picked me up only took me 5 minutes down the motorway, as he was going elsewhere thought I might be able to hitch from the hard shoulder.

He stopped the car in the divide between the junctions, with traffic passing at 70 miles an hour on either side. I manoeuvred myself onto the side of the highway heading back around past Calais, spotting a sign for Rennes and getting my hopes up. Naturally nobody stopped, as was to be expected, so I drudged for a mile or so on the hard shoulder and reached a roundabout on the outskirts of Calais which looked quite promising, however yet again it was proving to be nigh on impossible.

I left the roundabout and trekked down the side of the highway for another 2 miles approximately, with truckers beeping and policemen staring. Eventually I ended up in the dead centre of Calais and was losing faith in escaping this town by nightfall. I checked at the train station for a ticket to Bordeaux, but left as soon as I found out it was above 130 Euros.

After eating the majority of my emergency chocolate, and as I walked through the desolated, run-down industrial part of town, I felt an extreme sense of loneliness, the one you only experience abroad in an unfamiliar environment. I decided I would have to return to my hitching spot, after walking a huge circle of around 10 miles, but my luck was still running low. The sun was going down slowly and it seemed probable that I would be sleeping under the flyover or in my tent, which was still wet from the Dover dew.

Just as I was about to throw in the proverbial towel, a kind-hearted lady called Veronique puller over and I hopped in without waiting to hear where she was headed, I simply wanted to get out of that place. She was, in actual fact, headed to a city called Valenciennes, alot more Easterly than I would have liked but hitchers can't be choosers sometimes.

In my broken French we managed some reasonable conversation, she was a very normal lady, a teacher in Calais and hadn't picked up a hitcher before as I understood. I was very grateful for the ride and got that lovely feeling of movement after being stationary for quite some time. To have the miles flying by so quickly in moderate heat and comfort is something I won't take for granted again, that is for sure. 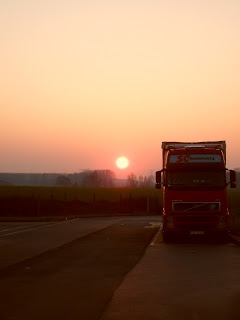 Once again it was hard to communicate a good place to part ways and I ended up at a tiny service station somewhere near Valenciennes and a small town called Orchies. After an hour or so my initial enthusiasm wore off, as it does when you get a ride but are stuck because of said ride. The sun set spectacularly over the small truck stop and it got cold quickly. I ate some nuts and raisins for a bit of a morale boost. That didn't last long though and like the flow of traffic my chances of getting out of the petrol station were dwindling.

It was probably getting on for 10 o'clock by this point and my luck shifted, a lady who spoke very good English said she could take me a little bit further down the road, only as far Orchies, but I jumped at the opportunity. She probably only gave me a lift out of pity, which is understandable, I probably looked quite a state by this point.

I exited at a roundabout just off the main road and bode her farewell and thanks, then flew a sign for the A1/A2 towards Paris. It was late though and it was doubtful I would get a ride. I decided to set up my tent just off the roundabout, thankful to have some relatively flat ground after Dover's incredible slant. It was cold and damp which made for another uncomfortable nights sleep, where once again I probably only got 3 hours or so.