Hitch hiking and various other pastimes #9

..They had managed to get a ride with a business man heading South, at first it seemed as if he was willing to go the 100km out of his was to take us to Toulouse, however we eventually found out it must have been a lost in translation affair, as he was headed towards Biarritz. Lauren was a peculiarly interesting guy who sold bus seats internationally and spoke 4 languages including Basque. The two lads from Yorkshire were lovely chaps, and it was a delight to have a bit of company.

We were dropped off with some haste in a small petrol station on the outskirts of Bordeaux, where we flew signs for Toulouse and Spain to no avail. We did however receive half a dozen tuna sandwiches and some bottles of water from a car full of young sportsmen. Strange positive experiences like this happen often when travelling, whether this is because you see more places and are therefore statistically more likely to find them or whether the positive nature of your travels attracts positive actions of others, I do not know.

After 5 or 6 hours, I willing to try get a few hours sleep round the back of the petrol station but we decided to stick it out for a bit longer. A Romanian coach pulled in and having nothing to lose, we gave it a shot but the person we thought was in charge said no.

In a peculiar turn of events though, an old guy asked us where we were going etc in Spanish and I told him as best I could, he then went to ask the driver for us again, and this time he accepted. One of my new found companions had his doubts about boarding the coach at that time of night, but I figured it couldn't be any worse than spending the night there, so we stuffed our backpacks in the trailer and followed the co-driver onto the packed coach.

I squeezed myself in next to an old Romanian guy who smelled just like the land I assumed he worked on. Soil and onions.

We got dropped off about 10km from Bayonne, in a moderately large service station with some quite exquisite seating areas amongst the tall pine trees and sandy ground under foot. We gathered out belongings and decided it was we camp out for the night and try hitch in the morning. By the time we had set up the tent and nestled down in our respective sleeping bags it was past 3 o clock and setting the alarm for half 6 was always a bit ambitious. We slept in in till around 8. 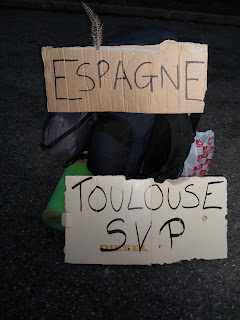 I awoke to yet another misty morning, unable to see the service station on the opposite side of the road, but we were in good spirits, despite the fact that we all knew getting a ride with all 3 of us was highly unlikely. After an hour or so trying the sign for Spain near the exit, they decided to go try on the forecourt, whereas I stuck out the sign technique for a bit longer.

It wasn't long though till I returned to the petrol station, feeling slightly glum about being so close to Spain but not being able to get there. At one point I was considering trying to walk to the coast and follow it down as far as I could, but I was eventually glad that I didn't make that rash decision, as only 15 minutes later I was cruising down the motorway in the back of a Dutch Lexus with Hermoet and Maria, who were on their way to an apartment in the Algarve.

Luckily James and Tom didn't hesitate in telling me to take the ride, for which I was very grateful. My Dutch came in handy when asking them for a lift as they didn't speak much English and probably wouldn't have taken me otherwise.

They were a typical older Dutch couple, very neat, precise and by-the-book, but we held some good conversations, as much as you can between a young hitch hiker and an elderly couple on a comfortably arranged holiday. They must have warmed to me however, because instead of dropping me off at the border as I had asked, they were willing to take me another 200km into the North of Spain, near to Burgos, where I was going to try head directly South, direction Madrid.

To them, I may have represented a substitute child or grandchild, as they treated me with parental kindness from the start, possibly due to me speaking their language. They had prepared alot of food, all neat and in it's own special place in the hamper..I have found the Dutch people love their organisation on both a small and larger scale, an inherent trait of a country where you live shoulder to shoulder. Biscuits, krentebollen, juice drinks were all passed to my back seat on the journey.

As if this wasn't enough, they insisted we stop somewhere for a picnic, and naturally I obliged. I returned from the toilet at the services in the middle of nowhere, somewhere in Northern Spain and found a veritable feast laid out on the marble seating area, picnic blanket and all...
Posted by Jack Spacey at 05:50