Hitch hiking and various other pastimes #8

..When I popped my head out of the dripping tent, the sun was just coming up over the trees, but it wasn't going to dry my tent any time soon, so I packed up and headed back to the roundabout. It is definitely a strange feeling; waking up and within 10 minutes standing at the side of the road trying to mentally coax people into stopping for you.

45 minutes passed quickly with the rush hour traffic zooming on by, white van men peering, other trying to pretend I don't exist. Cristophe was the person who stopped for me and took me for 20 minutes down the road to a large industrial estate with a lot of traffic passing through; it appeared to be a sublime spot, however and hour and a half of nothing but the cold wind chilling me proved otherwise.

I went to the petrol station to eat and had chosen a lovely breakfast when I realised I didn't know or couldn't remember my pin number. Things were going from bad to worse and my rumbling stomach wasn't helping matters, so polished off the emergency chocolate and headed back to my hitching spot. Suddenly a car stopped and out stepped Benoit, a friendly police officer who lived in Valenciennes but was going to work in Paris for 4 days. He was extremely kind-hearted and eager to talk, just what I needed after quite a miserable 12 or so hours.

He enquired as to whether I was hungry or thirsty,  to which I honestly replied that I was both, upon hearing this he offered me 2 slices de pommes and a can of drink. Bliss! Although I was hesitant to accept, he would have it no other way. We managed to hold a decent and varied conversation for the 300 km to Paris, where he dropped me at a huge service station. I grabbed some waste cardboard and scribbled a sign for Bordeaux as Benoit had suggested. I positioned myself at the exit and sure enough, the size of the services led to me acquiring a lift within 3-4 minutes.

A small German lady wandered over and said she could take me as far as Saints, a small place 75 km  north of Bordeaux. Naturally I obliged, and before long Angela and I were negotiating the Parisian ring road and consequently the French countryside past Tours, a beautiful white, pointy city, past Poitiers and over numerous large rivers, the names of which escape me. Angela was kind enough to let me try and sleep in the back of her van but I could only manage a paltry 25 minutes before I was back to ogling at the wondrous countryside.

After some confusion as to where Angela was headed and where I wanted to go, I got out at a small service station somewhere north of Bordeaux. As I waved Angela off, I heard a familiar accent drift over the parking lot. Two lads got out of a car and we exchanged pleasantries, they were from Leeds Uni and were doing the organised charity hitch hike to Morocco, coincidentally they had arrived at exactly the same time in the same services. I splashed out on some more overpriced long life plastic food and hadn't even finished the squidgy baguette before they shouted me over.. 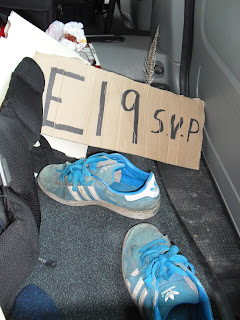