Hitch hiking and various other pastimes #5

..I tried the roundabout and the carriageway into Maidstone, predictably to no avail. I thought things might take a turn for the better at my next spot of choice, at the top of the road going out of Maidstone towards the large roundabout. I had a good sign, which was written on a discarded wine box whilst munching my selection of nuts, seeds and raisins, and what I thought was a decent spot. My insticts were wrong though and I seemed to get more blank stares in this spot than anywhere else.

I gave up and wandered into the meadow behind me, where I explored an abandoned house before heading back to the roundabout. Cursing after a half full energy drink emptied its remaining contents onto my shoe and trouser leg, I had had enough. I started the arduous slog in what was a very warm day, towards Maidstone centre. A passing cyclist remarked that it was a 2 or so mile walk. And a very unpleasant one at that.

I was headed towards Maidstone East railway station, where I was determined to catch a train to the coast. After some deliberation, I purchased the ticket to Dover for £17. Looking back I would have liked to have asked for directions to a nearby service station but at the time I was just desperate to make it to the fabled white cliffs. The train changed at Ashford International and then passed through Folkestone with some lovely views of the 3 and 4 storey coastal houses and glimpses of the cliffs that were to come, accompanying my reading of Patrick Leigh fermor as he crusied down the Rhine amidst castles. Upon arrival in Dover Priory, I headed towards the town centre and a supermarket to gather some supplies. A pear, a nectarine, 1 baguette, some biscuits and a tub of chicken spread contributed towards distilling my hunger.

Another 25 minute walk took me to the ferry terminal and just before I got there, I spotted a fellow hitch-hiker. An instant bond formed even though I had no sign or otherwise to suggest I was thumbing...A scouser. He had no money for the ferry, the poor guy had been there since half 10 this morning. By this time it was half past 5. I bode him good luck and we parted ways. When I arrived at the travel-service centre I was dog tired and sat down to rest and eat my homemade sandwich.

I had noticed that the majority of people I have met on my 2 day journey down to Kent have asked me if I am meeting friends over in Spain and are generally shocked when they recieve a negative response to their query. Could it be that a childhood filled with moving from house to house, from country to country, making friends and then abruptly ending the friendship has made me more of a solitary soul than others? I think this is very possible, although I do not seek solice, on the contrary I very much enjoy others' company. Having said that, I met a young lad from Dover who had just purchased a one-way ticket to Calais, for the next departure and got talking to him. I couldn't help but overhear his conversation with a friend of his who had turned up and had tried to persuade him to stay in Dover and asking about what was up with him, how come he was leaving.

I later found out that he had the notion that there was nothing here for him in Dover and he had packed some Lucozade, a suit and 300 quid and was headed to France to try get a job. He was a kind-hearted young chap, perhaps not the sharpest knife in the drawer but I felt for him and commiserated with his circumstances. It was good to see somebody throwing caution to the wind and trying something new. Even though he might be a bit naive, I hope he will manage and I offered him the advice to try head to Italy as he spoke the language to a certain degree.

He thanked me for my advice and we exclaimed that we may meet in Calais the following day. Him and the Warwick charity-hitchers left to board the 18.30 crossing, leaving me alone once again. I asked the lady behind the desk whether I had to purchase a ticket now and whether the services were open through the night. her response was no to both, so I headed out to find a suitable place to pitch my tent, climbing up past the flyover to the top of the spectacular cliffs as the sun was setting rapidly behind Dover Castle, lighting the clouds with a fiery orange glow. I took a few pictures and continued my search.. 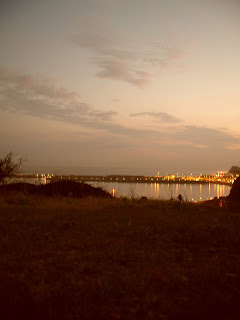