Hitch hiking and various other pastimes #10

..I devoured the old Dutch couples sandwiches and was even offered hot tea (at a picnic?!) after which we were on our way again. We had exited the foothills of the Northern Pyrenees and were now in a more arid, hilly climate, where I spotted a multitude of vultures drifting upwards on the warm air upsurge caused by a small cluster of hills.

Hermoet and Ria weren't quite as glad as I was to see these magnificent birds but exclaimed none the less. After a relatively peaceful and uneventful drive, we reached the last services before Burgos, where our paths parted ways. 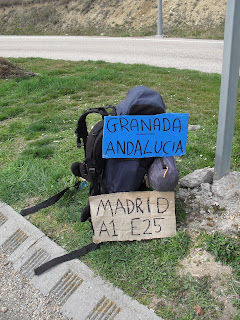 It was a warm, humid afternoon, and I quickly gathered my belongings and sought the exit, where I was in clear view of any cars approaching, with a completely empty car park at my thumbing disposal. Only 3 cars had passed before a white BMW sports car wound down its window, revealing Ysia, a sunglass wearing, short business man, returning to Madrid after doing some form of audio translating work near Burgos.

I clambered into the low car and off we sped, with air con blasting and Homer Simpson directing us from Ysia's iPhone. It was my first lift in Spain and it couldn't have gone any better, we talked at length about many subjects, mainly in Spanish, with my confidence building as the car surged on towards the capital.

Luckily he also spoke English quite well, so if I was lost for words, he would help me out and vice versa. We drove through desert-like terrain, until the road squeezed between two mountains, where snow still lay, and there was Madrid, its few skyscrapers pointing the way to the centre with many kilometres of suburbs sprawled out below them.

Even though Ysia was a Madrileno, he confessed to not even barely knowing the city, such was its vastness. Consequently we drove around the ring road fruitlessly looking for a service station. He had already taken me all this way and was now headed in the opposite direction to his house, so I jumped out at the next petrol station I saw, without a clue where I was in relation to Madrid or to where I wanted to be.

I flew my sign for Andalucia half heartedly, knowing it was more than a long shot. This is where I met the kind young man who gave me the money for the metro...

So the gig with Erick was interesting to put it one way, it turned out to be some slightly overly happy Christian R&B soul cover gig, which would explain Ericks kindness earlier in the day. But I had a place to be, with some new people and some overpriced drinks, while they played covers of Wonderwall with a Christian twist. 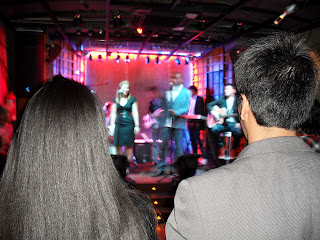 All the religiousness was admittedly a bit much for me, with every other lyric being 'Believe', so I believed I would leave after the gig and turn down an offer to sleep on a band-members couch. And out into the busy night I burst, the streets being even more crowded than in the daylight. I walked past the plethora of prostitutes and the hoards of homeless, toward the train station, Atocha, where I thought I might be able to get a few hours sleep before getting the train as early as possible.


Atocha was shut though, Madrid's homeless problem means that it would become their hotel had it have been open through the night. And it was indeed a homeless person who came over and started talking to me, some fellow from Portugal, who was drunk. I was in a strange mood, so I went along with it, he said he'd take me to the bus station, but it was he wanted a ticket, which I wasn't prepared to do. I told my name was Raul for no reason, then left him and got directions to the bus station, a good 25 minutes walk from the train station.

I was hoping it might be open so I could sleep a bit, but most of the homeless people had the same idea, however it didn't open til 5. I found this out from David, a long haired chef from Granada, who was waiting to get the metro to the airport and fly to Seoul, where was going to be living for a year.

As we had 3 hours to pass, me and David had a great conversation, delving into everything, including travel (he had lived all over the world, including various places in London), drugs and how strange a place Madrid is. He shared his hashish and we had a very pleasant if not slightly chilly time.

Come 5 o clock, we exchanged emails and entered the bus station along with the majority of Madrids unemployed and homeless. I gave in to the beggars again and gave some guys nearly 4 Euros, most of which he plunged immediately into a Bandit. I ate churros, avoided a horrible little pervert in the toilets and got the hell out of Madrid for only 16 Euros...
Posted by Jack Spacey at 05:56